The TV Model Evolution and the Infrastructure Needed to Enable It

The TV Model Evolution and the Infrastructure Needed to Enable It 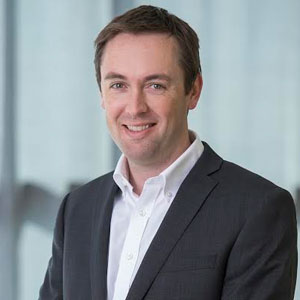 If the U.S. presidential election told us anything, it validated the relevance of the television industry, with a record-breaking 84 million viewers watching the first debate liveback in September, per Nielsen. Nielsen also reports American adults spend an average of four hours and nine minutes watching TV every day and PwC predicts U.S. TV ad revenues will grow from $73 billion in 2016 to $81.7 billion in 2020.

The Traditional TV Model is Changing

That said, we are starting to see a substantial shift in the way people consume TV content. It’s no secret young people watch less traditional TV. Nielsen’s most recent “Total Audience Report” indicates Americans aged 18-24 watched a weekly average of 15 hours and five minutes of traditional TV during Q2 2016. That represents a year-over-year decline of roughly one hour and 20 minutes per week.

This audience, more than anyone else, is pulling the plug on its pay-TV service. The traditional broadcast television ecosystem of content producers, programmers and multichannel video programming distributors(MVPDs) has to acknowledge this changing model, embrace it and evolve.

First, let’s be clear: this shift in viewing preferences isn’t necessarily a bad thing for the industry. The big reason traditional cable and satellite subscriptions are down is people are turning to online video services like Netflix, Amazon Prime, Hulu and Sling TV. Consumers are watching more video than ever, and while they may cancel their pay-TV services from Comcast, Verizon Fios or AT&T, they will pay for broadband and mobile internet services from these same providers.

​OTT is a fast-evolving landscape, with providers aiming to reproduce a broadcast TV-like linear experience

What’s more, a recent forecast from SNL Kagan indicates over the next 10 years, the cable industry will fare quite well. Despite forecasts that show traditional TV subscriptions are expected to continue on a decline, falling 1.5 percent per year over the next decade (which is actually lower than previously anticipated declines of 1.7 percent), broadband subscriptions are projected to increase by eight million over the next decade, reaching 71 million by 2026. This would amount to 1.6 times the number of video subscribers if SNL Kagan’s forecasts hold up.

The TV market from an ad perspective is still growing, yet broadcasters have another avenue to leverage their existing brands, expertise in content creation and licensing savvy. For an indication of how effective this strategy is, you can look to the success of original programming like the Netflix series “House of Cards” or Amazon’s award-winning “Transparent.” For Amazon, the importance of original content is so high, the company provides a platform for aspiring screenwriters to submit their work and have their original stories turned into movies or serials, like the acclaimed “Sense8.”

Beyond original content, initiatives are underway to make traditional content more accessible and diversified through multiple delivery models. For example, Turner Broadcasting has expressed its desire to sell streaming subscriptions to its channels—including TNT, CNN and Cartoon Planet—to consumers. This won’t happen soon, but Turner’s CEO, John Martin has said, the network is starting to build out the technology his company will need to deliver its own programming over the internet after their acquisition of a majority stake in iStreamPlanet in 2015.

Of course, this also means Turner will end up competing with its existing customers: pay-TV distributors like Comcast and Charter, which pay his network substantial carriage fees today. However, Martin has said it is critical for his business to evolve to a position where it can offer an end-to-end solution, direct to consumer.

Another example is Walt Disney Co., which is launching a direct-to-consumer ESPN streaming service after investing $1 billion in BAM Tech, Major League Baseball’s streaming technology offshoot. While the channel will not include content from ESPN’s linear channels, it is still a signal of media companies’ acknowledgement of the growing importance of OTT in today’s media and entertainment mix.

OTT is a fast-evolving landscape, with providers aiming to reproduce a broadcast TV-like linear experience. However, broadcast distribution media have been optimized over many years to provide a reliable, scalable and consistent experience whether delivered over-the-air, via satellite or over cable. The internet is a best-effort medium and considerable engineering work is required to deliver the same experience and support monetization models.

The diagram below provides an example of a generic linear OTT workflow from the acquisition of a mezzanine quality broadcast feed and the ingest of the associated metadata through the various video workflow components to the point of consumption across multiple devices.

One of the most important elements of this end-to-end workflow is the content delivery network (CDN).  A CDN is responsible for providing the high quality andconsistent user experience for end users wherever they are located, to whichever ISP they are connected and whatever content they are viewing. 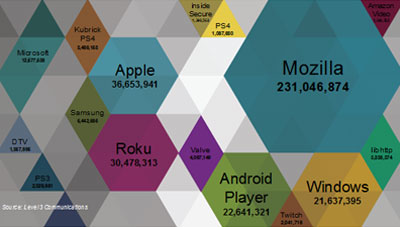 One of the elements of the video workflow that has a large impact on the experience is the end-user device and the video player running on that device. In a single hour, Level 3 identified 3,325 unique client types consuming video content from its CDN. Even for devices like Roku with few hardware versions,Level 3 identified 32 distinct variants based on different firmware versions, each with its own performance characteristics.

Figure 3: October 2016 – Download Speed and Buffering by US State

Location and network can have an equally large impact on performance. In Figure 3, Level 3 measured video performance at peak hours across the U.S. for multiple video customers. Nevada and Virginia are in the top third of U.S. states for download speed but have some of the worst buffering statistics, whereas Iowa has the slowest download speeds (29 percent lower than California) but on average, users in Iowa spend almost 50 percent less time buffering than South Carolina.

AT&T is reportedly in planning for its DirecTV Now online streaming service to become its primary video platform by 2020, replacing satellite.If that trend is replicated across other platforms, we will likely see a 10-20x increase in OTT streaming over the next five years.

Before we get too excited,it’s important to note, today’s internet infrastructure would not be able to support audiences of that size. The largest global streaming events are attracting audiences of around 10 million concurrent users, and we are seeing some ISP networks struggling to cope with the peak load. To be successful in the delivery of a consistent, reliable and seamless experience, substantial investment in infrastructure and some evolution of technologies (compression, transport, players, etc.) will need to be made to keep up with this growth.

I have no doubt this will happen; particularly when you rememberfive years ago, the largest events were only attracting one million concurrent users and five years before, HD video was not even feasible for internet streaming. We’ve come a long way in a very short periodand there are no signs of this pace of internet innovation slowing. The question is, will technology be able to keep up with the pace of demand?